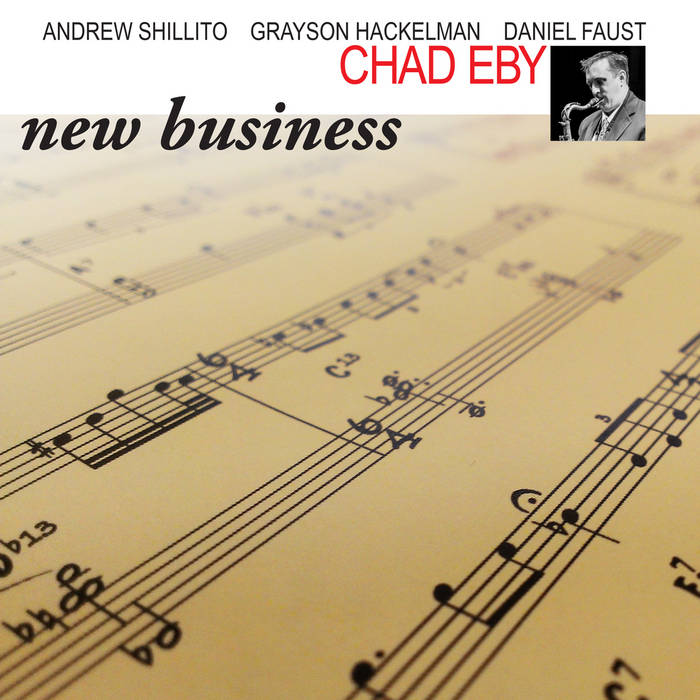 COMPLETE TRACK LISTING:
1. Frelon Brun (Miles Davis)
2. I Don't Stand A Ghost Of A Chance With You (Victor Young)

About Andrew, Grayson, and Daniel:

When I walked in to my first rehearsal with UNCG Jazz Ensemble II in the fall of 2006, I began working with a group that featured two relatively unremarkable freshmen in guitarist Andrew Shillito and Daniel Faust. When I say unremarkable, I mean only that they didn't really separate themselves from the crowd, or particularly stand out. As the years passed by, their work ethic and dedication to being lifelong students of the music became apparent. Andrew sought me out for countless extra lessons/duo sessions in my office, and refused to approach the guitar from a small-minded approach - learning as many Ben Webster solos (or more) as he did Wes Montgomery solos and not accepting the difficulties in absorbing the nuance of horn or piano players as insurmountable. For years, Daniel has called, e-mailed, or texted me at all hours of the night after a gig in which he messed up a tune with one particular left-turn or another in it, asking me what the title was and what recordings he should check out. The next time we would play the song, he'd know it so well he would sometimes catch me napping.

My working quartet leading up to this session included my dear friend, bassist Steve Haines. Sadly, a couple of short weeks before the session, he suffered a debilitating injury to his "thumping" shoulder, and is still recovering from a difficult surgery to repair the damage. I knew my first call needed to be to Steve's protege Grayson Hackelman, who was my regular fill-in for Steve. Although he had since relocated to New York, I was lucky enough to be blessed with his gifts. He went above and beyond to learn the music in short order, and I am glad to have been able to feature him here. Plus, he's a great babysitter, and no slouch as a filmmaker...

It was a pleasure to write the Trenton Doyle Hancock suite. In the fall of 2011, Ann Grimaldi from the Weatherspoon Art Museum in Greensboro and I forged a partnership where my jazz studies students and I compose works inspired by the traveling exhibits passing through the museum. Mr. Hancock's exhibit was the first of hopefully many chances for us to collaborate. Google him and check out his work!

The remaining 5 songs are each tunes that had nagged at me for years to learn them:

"Frelon Brun" hails from my second favorite Miles Davis album, "Filles De Kilimanjaro". It's at once so simple and so complicated...plus, trying to figure out how to make a musical roadmap out of the jarring Teo Macero edits was a huge challenge.

"I Don't Stand A Ghost Of A Chance With You" has been a favorite ballad of mine since I first heard Clifford Brown's recording of it. Many years later, I was playing a gig in Ohio's Columbus Music Hall, the end of which was crashed by Wynton Marsalis' quartet and a resulting jam session. Wynton ended the night playing this song, and ever since then, it's been sitting there in my ears, churning around...

"Day In Day Out" has been with me since I saw a video of Nat "King" Cole singing it from a 1960s TV broadcast. The band was roaring away in the background, and Nat was smoothly walking through the studio, singing it as if he was just out for a stroll through the park.

My mother introduced me to "West Side Story" as a child (I guess she thought I needed an introduction to singing and dancing street gangs with switchblades...not too common in Newhall, Iowa in the '80s). "Maria" is arguably Leonard Bernstein's magnum opus, and it's a melody I've loved literally farther back than I can remember.

I honestly believe that "The Sorcerer" is the hardest song I've ever learned. There are dozens upon dozens of tunes with "harder" chord changes, but this one really kept me guessing for a long, long time. Steve Haines and I had been actively trying to aurally decode it's oblong phrase shapes and harmonic twists for a year or two by the time I made this recording. I feel like I'm finally getting close...this tune is dedicated to Steve-O Grande, with whom I toiled to untangle it's musical knots, and with whom I will no doubt make music again soon.

Bandcamp Daily  your guide to the world of Bandcamp